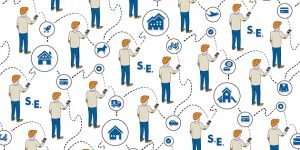 As I lift my head above the constantly flowing, turbulent and always changing waters of startup land, I thought I was long overdue to share some of my own discoveries. This time it’s around innovation, disruption and the new models that are inspiring, challenging and keep me learning about human behaviour and technology adoption.

Let me start with a bit of a preface… one of the key things that drives both Digital & Agile and Hills & West (my two passions), is that they both collaborate and partner with people, businesses and brands that have a strong inherent purpose to make a change for the positive. This is then coupled with some good old traditional values of quality, connection and always looking at ways to improve.

Last year I worked with some amazing businesses and like myself, they have a love for tech and embracing this tech to create something new to challenge the status quo.

Here are my first thoughts on what I am calling the ‘Sharing is Caring’ series.

New models and economies are popping up everywhere. What I am infatuated with is how different businesses are embracing human-centred approaches to deliver services. Businesses like Airbnb and Uber have been frequently referred to as ‘market disruptors’ and are monumental examples of disruption and innovation. The concept behind the term ‘market disruption’ however, is not as new, edgy and innovative as some believe. Thomas Edison we know, amassed his fame from creating the light bulb. When remembering Edison and all of his amazing inventions, people often mistake two things:

1 – That he was the first inventor of the light bulb

2 – This singular invention was the quintessence of his genius.

Actually, Alessandro Volta developed the first practical method of generating electricity. Edison generated the first patented incandescent bulbs, still in use today. So what is it that made Edison’s bulb so successful? Why is he so much more revered than Volta? Well, from a product development perspective, Edison’s was just better. And also because (as Tim Brown states in his HBR article Design Thinking), “Edison understood that the light bulb was little more than a parlour trick in absence of a system of electric-power-generation and transmission to make it truly useful… So he created that too”.

Generating a successful ‘market disrupting’ business has very little to do with a just a singular cool idea and everything to do with understanding peoples wants and needs (most of the time, they don’t know it yet).

Through understanding, observation, empathy and research into peoples needs, likes and dislikes innovators/disruptors can identify problems and try to conceive a solution. The ‘sharing economy’ is one such industry that I have been embracing. I love observing people’s reactions, adoption and sometimes rejection too.

There have been many developments in tech, communication and globalisation that have facilitated the emergence of this economy including the mainstream acceptance of;

As the ‘social glue’ of trust between strangers grows, so too has our courage in pushing traditional boundaries around the way we live and work. Many new businesses are generating a community of cooperative enterprises focused on widespread access, opportunity and trust. It’s not just about the revenue.

The Australian “Sharing Economy” is estimated to generate over $15.1 billion each year and is projected to grow to $55 billion by 2021.

65% per cent of all Australians have participated in a Sharing Economy service in the last 6 months while 38% of Australians are currently spending at least $50 a month on such services. 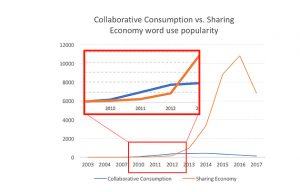 The ‘Sharing Economy’ is HUGE and if often paraphrased with ‘Collaborative Consumption’, ‘Collaborative Economy’, ‘Peer Economy’ or the ‘Access Economy’.  These terms define an ever-evolving marketplace that is constantly expanding and innovating.

Rachel Botsman early in defining these terms in her TED talks and other various published sources, defined the Sharing Economy in 2010-2012 as;

“An economic system based on sharing underused assets or services, for free or for a fee, directly from individuals… largely based on peer-to-peer marketplaces that depend on the social glue of trust between strangers.”

However Collaborative Consumption has been defined in 2010 as:

“Traditional market behaviours — renting, lending, swapping, sharing, bartering, gifting — [are reinvented] … to unlock the social, economic, and environmental value of under-utilised assets… It includes three systems: product service systems, collaborative lifestyles and redistribution markets that enable people to pay to access and share goods and services versus needing to own them outright”

They both talk of unlocking the value of underused assets. They both feature peer-to-peer marketplaces. They both are pretty similar. The Sharing Economy is about an individual directly sharing an underused asset/service, and Collaborative Consumption is about giving up individual, outright ownership and paying for the access and sharing of underutilised goods.

Because I am a geek

A quick Factiva search looking at the popularity in use of these words across publications, web news, blogs and various forms of multimedia around the world told us that between 2010-2012 year period, these two terms were beginning to be used more (with Collaborative Consumption being slightly more popular).

The Sharing Economy grows exponentially more in use beyond 2012. Nowadays, it is used more as an umbrella term when referring to the ‘x’ type of economy, or a new type of marketplace.

Despite definitions, the concept of disruption has been around for a long time! And I love the way people and businesses are looking at new ways to bring this thinking back through technologies and new business models.

There is an abundance of opportunities that the digital space offers, which extends far beyond sharing. So, my next Sharing is Caring piece will be a journey looking at how global tech trends and emerging economies are changing how we work and live.

“Alone we are smart. Together we are brilliant.” – Steven Anderson.