Unlocking the potential of Sharing 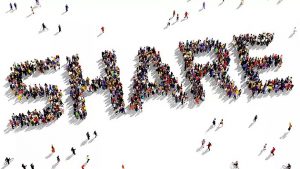 Continuing on from my last update, Sharing is Caring: Growing Economies, the sharing economy movement is gaining momentum around the world, and so it should.

Finding ways to combat the ever increasing cost of living, the wear and tear on our environment and our unfortunately learned ways of over-consumption, forever continue to be a concern. Luckily tech advancements, new digital platforms and start-ups are enabling supply and demand to be increasingly convenient, efficient, economical and environmentally conscious.

There are clear measurable benefits around sharing resources, but it goes far beyond just the numbers of the impact today, we need to look at the long-term picture of forever. So following are some of the things to consider and see how you can bring a little sharing into your own life.

Since the emergence of the sharing economy there has been a reduction in physical waste and wasted resources. For example, not long ago, 80% of objects in a home were used less than once a month, and 95% of the time, cars were left unused. This was due to the culture of generations predeceasing Millennials, valuing ownership over the goods they purchased.

Within the past decade however, the growth-rate of cities, for the fist time since the 1920’s, has matched the growth-rate of suburbs. Densely populated areas do not allow for space, or cars… and typically in a large city, the cost of living is a lot higher, making those luxuries less accessible. There was a need and demand for “usership” and a new way of living and value system. The sharing economy may have started with people looking to monetise spare time and goods however the sharing economy is now being utilised as a mainstream source of income, and potentially living, for many.

The sharing economy is enabling retail and consumer goods to be used to their fullest instead of throwing them away when there is no longer a use for it. There is a decrease in the use of transient single-use products and an increase in manufacturing goods that are multifarious and durable.

Increased interest in the circular economy: “A circular economy is an alternative to a traditional linear economy (make, use, dispose) in which we keep resources in use for as long as possible, extract the maximum value from them whilst in use, then recover and regenerate products and materials at the end of each service life.” – wrap.org.uk

The marketplace was already primed for an access over ownership mentality as early proponents of subscription services such as Pandora, Spotify and Netflix led the way. Experiences or products that typically demand a high upfront cost can now be obtained at a much lower cost by mitigating ownership and paying for access instead. The burden, that is the costs often associated with ownership, and the complexity in maintaining an item or product are now mitigated. There are now also lower entry points to creating one’s own business or job, which means that there’s opportunity for everyone to have a slice of the pie.

While people have always bartered for services and traded, sites like craigslist don’t consolidate as well as the way Airbnb matches rooms with those who need it. Or how Zipcar matches cars with local people who need one. And, of course, The Room Xchange, which I am part of that connects busy hosts with a spare room, with guests, who exchange a couple of hours of help around the house each day in exchange for a place to stay. Through these platforms, products and services are now accessible to anyone, anywhere. Digital platforms create connections and matchups faster and easier than before and it enables people to fulfill needs and wants that they didn’t even know they had.

Many early Sharing Economy movements start off community driven and local, where a sense of trust is established. The social currency of trust is what enables the commercialisation of these community driven movements, so that these Sharing Economy platforms are able to scale up and provide the benefits of affordability and convenience to more people.

The Sharing Economy uptake has been growing exponentially, with nearly half of US adults familiar with the Sharing Economy and two thirds of Aussies actively engaged in it. In Europe, sharers have benefited with average earnings of €2,500, which suggests that this could become important supplementary income streams for households in the future.

Australia’s sharing economy has increased in size rapidly over the past few years, growing from $14.5 billion in July 2016 to over $15.1 billion at current estimates.

The market for peer-to-peer (P2P) services, for example, is projected to grow to a whopping $55bn by 2021 – nearly a fourfold increase in five years. It is a HUGE opportunity.

There are over £3.5 trillion worth of idle human and physical resources in the world, and that’s just what we know of. Unlocking their potential could solve major global challenges that are happening as a result of the world’s changing demographics and needs.

I will add this again as I love it… “Alone we are smart. Together we are brilliant.” – Steven Anderson